The National Cave Rescue Commission (NCRC) is a group of volunteers dedicated to train and organize cave rescue resources in the United States. The NCRC was charted by the National Speleological Society (NSS) in 1979, and is under the Department of the Administrative Vice-President of the NSS. NCRC serves as the Society’s liaison on matters of cave rescue training and operations.

The NCRC is not a cave rescue team. It is the organization that provides training and development opportunities for individuals and professional organizations who actually assist in cave rescues. The NCRC develops and maintains a national curriculum in these cave rescue operations.

The Eastern Region of the NCRC serves the following states — Delaware, Maryland, North Carolina, Pennsylvania, Virginia, and West Virginia. The Eastern Region is the largest of all the regions having approximately a third of all active cavers and over 10,000 known caves in the United States. 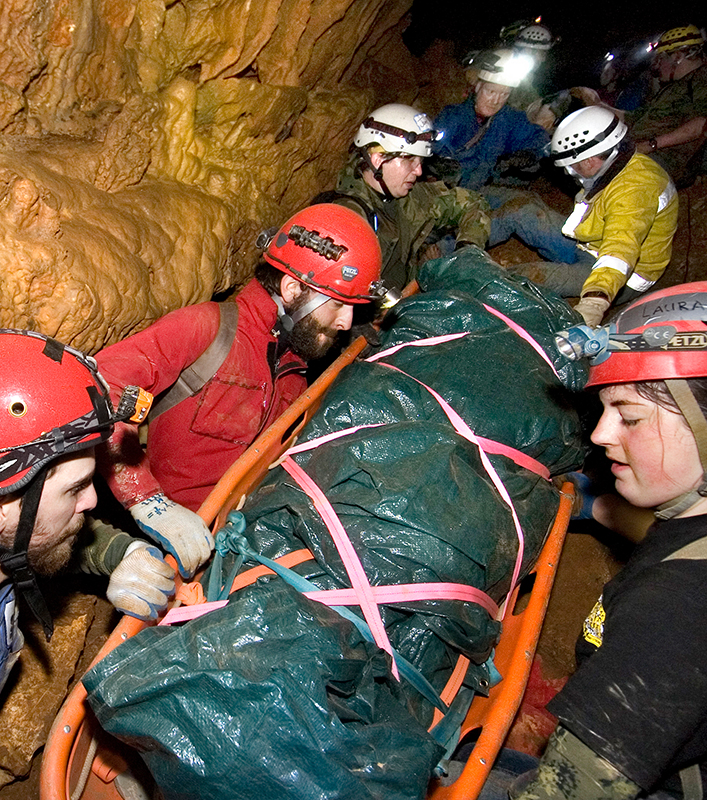 IN CASE OF AN EMERGENCY

If you have an emergency situation, first contact your local emergency services by dialing 911.

After calling 911, you should contact the Regional Coordinator of the Eastern Region of the NCRC and advise them of the situation by email at . This will allow a timely alerting of caver resources, who may be available to assist the local emergency services.

To assist us in helping you during a caving incident, it is strongly suggested that you use a Caver Alert Information Sheet and leave it with your emergency contact person before you go caving.

The journal of American Caving Accidents archives accident and safety incident reports in the North American caving community. Published annually by the National Speleological Society, it serves as an educational resource for cavers and cave rescuers.

The United States’ National White-nose Syndrome decontamination protocol has been updated (Oct 2020) to reflect recent laboratory testing results. It is important to clean your gear to prevent spreading the fungus. All people receiving training with NCRC must abide by these decon procedures.

Seven different courses are offered by the NCRC. Each vary in skill level, starting with an introduction to cave rescue, and ending in a master level of certification. Other courses offered concentrate on team operations or small party rescue efforts. One can spend three days or up to two weeks in training.

When Underground: What to do After an Accident

So you’re on a caving trip and you or a member of your trip becomes injured. In the minutes after this happens several things must be done to insure the safety of the injured and everyone else. Read further for information every trip leader, and caver, should know.

A Caver Alert Information Sheet (CAIS) helps your emergency contact. Fill it out and leave it with your contact before you cave. It gives all the vital information needed to start a search and rescue operation. The contact should follow the instructions on the sheet if the trip leader does not check in after the trip.

The first rule when caving is safety. Each trip underground should have a call-out person, which is designated before the trip by the trip leader. This person is someone who is not on the trip and their function is to notify emergency services if the trip leader does not check back in with them at a certain time.

The NSS Guide to Responsible Caving discuses the many aspects in the sport of caving. Exploring caves is becoming increasingly popular in all areas of the world, and caving responsibly is more important now than ever. Learn about safety, training, reduce your footprint in caves, and cave owner relations.